Who’s Who in Hispanic Chicago 2020 nominations are open

Negocios Now is calling for nominations for the Who’s Who in Hispanic Chicago Special Edition to be released on June 26, 2020, during the 7th annual Gala celebrating Chicago’s Hispanic leadership.  The deadline for submissions is March 31.

Candidates will come from a variety of industries including Business, Finances, Real State, Law, Media, Government and others.

Nominations will come from community members based on criteria that have been established for each category. Nominations can be made on the Negocios Now website at www.negociosnow.com/whoiswho.

During the gala, awards will be presented, including Business of the Year, Community Champion, Latinas in Business Award, Lifetime Achievement Award and El Amigo de Negocios Now, along with recognition of one special corporation for its commitment to the Hispanic community.

“Since 2014 we have enjoyed recognizing Hispanic leadership in Chicago and  we are pleased with the tremendous response of our community”, said Clemente Nicado, Publisher. “We are looking forward to celebrating another successful event”.

Negocios Now was founded in 2007 and is published by Nicado Publishing Company. The national award-winning publication is the Midwest’s most dynamic news source for growing Hispanic businesses, focusing primarily on business owners, entrepreneurs and economic development in the Latino community. In 2011 Negocios Now received the “Outstanding Business Publication” and “Outstanding Business Article” awards from the National Association of Hispanic Publications. In May 2012, The Chicago Headline Club, a leading association of local professional journalists, awarded Negocios Now the Peter Lisagor Award for General Excellence, a first for a Hispanic newspaper in Chicago. Founder, Clemente Nicado, was named Publisher of the Year-2018 and is the author of “Así lo hicieron”, a 2012 book featuring profiles of outstanding Hispanic business people in the Chicago area. 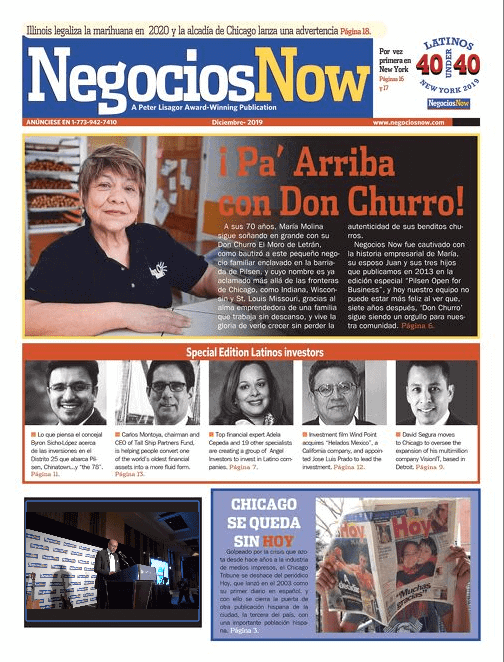