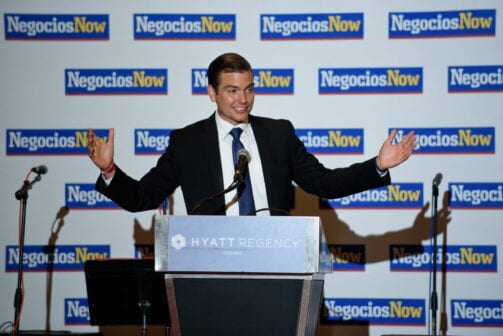 Chicago, (Hispanic News Agency)- ABC7 anchor and reporter Mark Rivera will be the emcee of Negocios Now’s “Who’s Who in Hispanic Chicago” virtual Gala event to be held on August 28, 2020, at 5:30 pm CT to celebrate Hispanic leadership in Chicago.
“We are grateful to have Mark again at the Negocios Now gala and for ABC7’s continued support of Negocios Now,” said Clemente Nicado, Publisher. It will be the seventh consecutive year that Negocios Now celebrates with a special edition of the publication. This year it was published at the beginning of July and dedicated its cover to recognizing Latinos who are fighting the COVID-19 pandemic.
During the virtual celebration, Negocios Now will recognize the following leaders with four awards:
Negocios Now will also announce another special award for a Latino or Latina who has been on the front line in the fight against COVID-19.
Wintrust Community Bank serves as the main sponsor of the “Who’s Who in Hispanic Chicago” special edition and Gala event. Additional supporters include Accenture, BMO, ComEd, Peoples Gas, Dominican University, Hilco and Miramar Group.