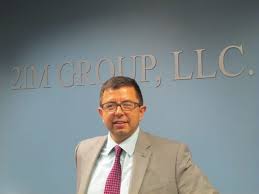 Civil engineer and owner of 2IM, Luis Montgomery, brings a passion for people and relationships to running his business.

In 2002, Luis Montgomery and his wife packed up their lives and moved to London for his next role as a civil engineer. They welcomed two daughters and built a life there, but eventually found themselves at a crossroads: They liked living abroad but it was hard to be away from home and their extended families back in Illinois.

Also pulling Montgomery toward Chicago was a former co-worker living there. His pitch, according to Montgomery, was simple, but convincing: You don’t have a job if you come back to Chicago so you’re starting from zero. If you’re ever going to start a business, this is the time to do it.

Then, there was a job opportunity in Australia which Montgomery, a U of I grad, thought might put him on the path that he dreamed of when he initially went into civil engineering: international travel and splashy, large-scale projects abroad. In the end, family won out. Montgomery and his family moved back to Chicago.

Threaded through Montgomery’s journey are the bonds and relationships he’s built, both familial and professional.

Montgomery was born in La Plata, Colombia, but arrived in Chicago when he was just a toddler. His father, a U.S.-born American academic, returned stateside to pursue a PHd in sociology at the University of Illinois at Chicago with the family in tow. By the time they were set to return in the late 1970s, civil unrest and violence there kept them here. Montgomery didn’t lose ties with his home country, however. He was later able to spend summers in Colombia while also cementing his identity as a Chicagoan, living on both the north and south sides and eventually attending St. Ignatius College Prep.

Today Montgomery’s company, 2IM, is a civil engineering and environmental services firm specializing in stormwater management. Their clients include the public sector, utility companies throughout the state of Illinois, and private developers.

Not only driven by the technical aspects of business, but Montgomery also cites the camaraderie of his peers and staff as a motivation. “People make your business,” Montgomery says. People like one of his employees, a Mexican immigrant who arrived to the United States as a young boy and has now found a mentor in another employee of Montgomery’s: a white American who grew up on a farm in central Illinois and is now an expert in hydraulic modeling for 2IM. “They’re like two peas in a pod,” he says. That connection and friendship between two people from seemingly opposite cultures make Montgomery proud to be in business. “That is a great American story.”

Taking lessons learned into the future

When Montgomery arrived from London he brought with him the sustainable water practices he learned while there. That knowledge has proven to be key to what is now his business’s specialty in stormwater sustainability and management.

After developing this and a couple of other areas of expertise, Montgomery says he had to learn a lesson: He had good people doing good work in their specialties and instead of trying to tack on others, 2IM needed to focus on growing vertically “where our talents are easily applied.” That lesson has led them toward notable projects across the state as well as in local airports, including the current O’Hare Airport terminal expansion project.

Montgomery hopes to take the company’s disciplines and transfer them to other states and even internationally. His big dream is to do a project in La Plata in Colombia where he was born.