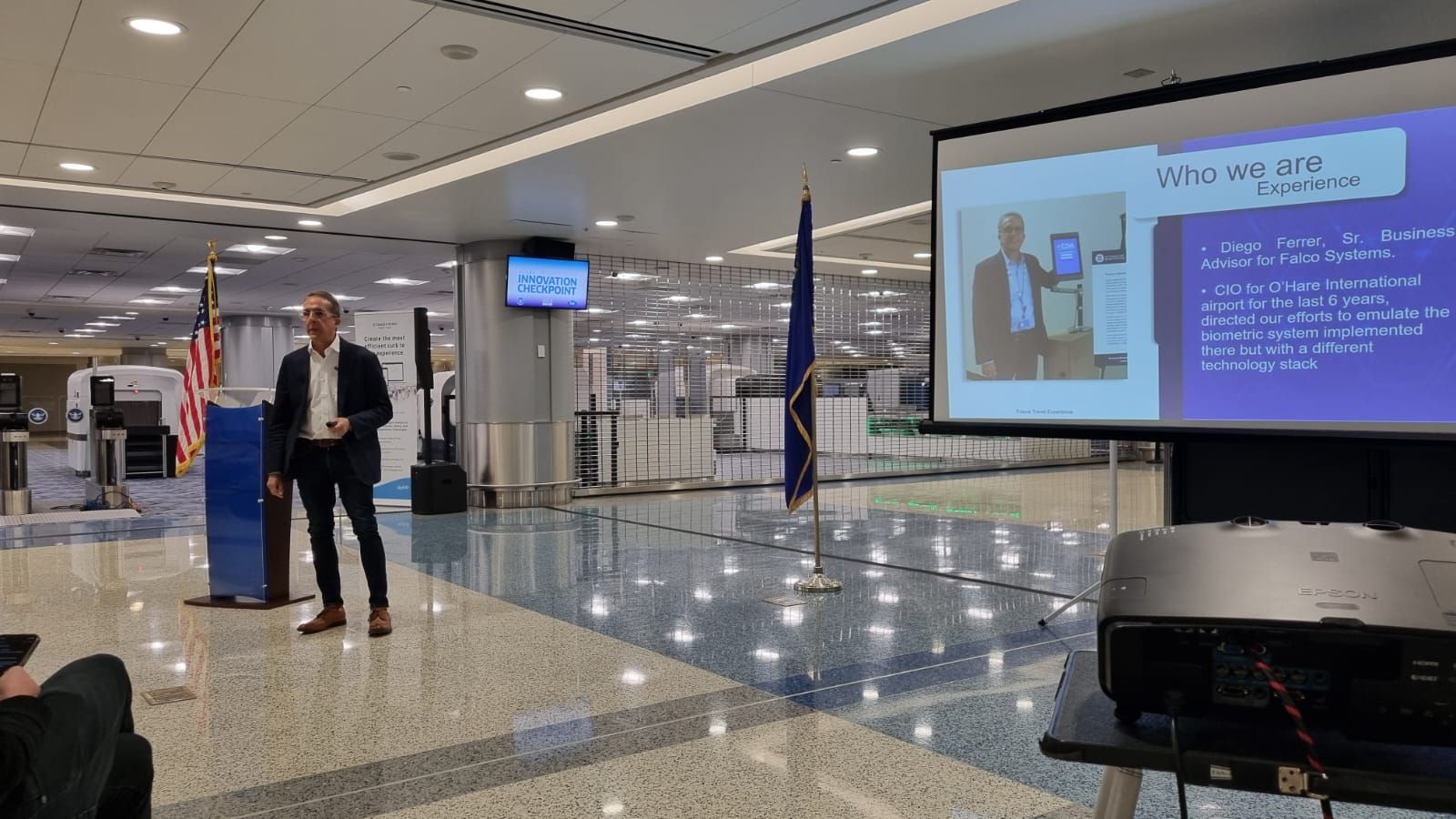 Diego Ferrer is putting his deep experience in computers and aviation to work in a new startup that he and his partners hope will be notable for not being noticeable. Their goal, said Ferrer, is to streamline the check-in system at airline gates.

In the wake of the Sept. 11 terrorist attacks, Congress wanted biometric tracking of international travelers. U.S. Customs and Border Protection itself handles the collection of biometric information such as photographs and fingerprints for international travelers coming to the United States. It wants airlines to handle the system for outgoing passengers, Ferrer said.

Ferrer and his partners at Falco Systems (Rafael Romero and Francisco Gaivis) are developing a facial recognition system to sell to airlines and perhaps others, he said. Their pitch, he said, is founded on the reality that today’s government pilot project often becomes tomorrow’s mandate.

Falco’s technology integrates with the border protection computer system, and the process starts with a passenger coming to an airline gate.

At the gate, a camera photographs the passenger and sends the picture to the border protection system, he says. “CPB has a picture of every person traveling because they either have a U.S. passport, a foreign passport, or a visa.”

With this type of one-step processing, a camera and computers do all the work, and boarding times will be the same as they are now or shorter, he said.

“There are other companies doing this. They’re big companies compared to us,” he said. “The competitive advantage we have: One, we use off-the-shelf components so we don’t have any proprietary hardware, and two, we’re setting up alliances with distributors.”

Buying off the shelf is difficult for airports unless a vendor contract is in place, he said. Without that, any purchase requires a lengthy and formal bidding process.

The Falco system could also be used to grant access to airport lounges, he said. “We want it to be an opt-in process. If the passenger wants to do this, they would have an app. So they would take a picture of themselves through the app and get it registered with the airline lounge or a third-party lounge,” he said.

Ferrer has the right experience for this work. For six years he was chief information officer for the Chicago Department of Aviation and was in charge of all technology and communications systems for O’Hare and Midway airports. Now he splits his time between Falco and his consulting company Orinoco Systems LLC.

He said he’s been interested in computers since he was a student at Universidad Simón Bolivar in Caracas, Venezuela, but he no longer writes code.

“I’m more of a high level architect. I could code, but it’s kind of like when you’re a baseball player: You get older, you don’t bat anymore, then you become a coach. So that’s me,” he said.

Ferrer says his work is both for him and for the Hispanic community because it’s unusual to find Hispanics in IT. Several years ago he started Electronic Knowledge Interchange after he read “The World is Flat,” the 2005 book by Thomas Friedman that explored the globalization of business and supply chains. Ferrer said he did “nearshoring,” working with clients in the United States but using programmers from Mexico and other countries in Central and South America. Clients benefitted from lower costs and the convenience of working with people in the same time zones, and the programmers received work and experience, he said. Now he and his partners at Falco are hiring IT workers from Venezuela, Panama, and Mexico.

“A Latino sees another Latino being promoted, having a good position, that can inspire him,” he said.