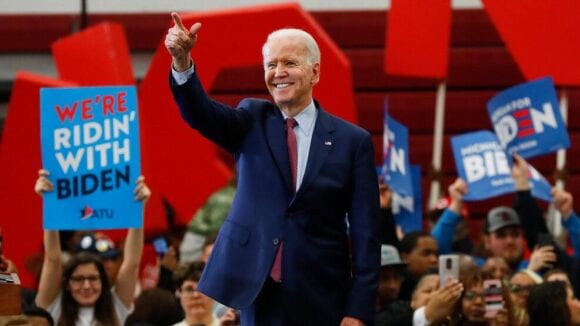 Washington – Dec 14 – Former Vice President Joe Biden on Monday surged past the 270 electoral votes needed and is slated to become the 46th president of the United States.

Biden is expected to speak tonight but his transition team released an excerpt of his remarks Monday afternoon.

“If anyone didn’t know it before, we know it now. What beats deep in the hearts of the American people is this: Democracy,” the remarks read. “The right to be heard. To have your vote counted. To choose the leaders of this nation. To govern ourselves.”

Most electors met at their respective state capitols Monday – primarily at designated times set forth in state law – to cast their ballots. Voting began as early as 10 a.m. EST in several east coast states and ends as late as 7 p.m. EST in Hawaii. Although due to coronavirus concerns, electors in Nevada met via video, while Arizona’s electors met at a secret location because of security issues.

Although Trump and his campaign team filed numerous lawsuits over vote totals in several key states, most were unsuccessful and each state certified their popular vote. Most recently, Texas filed suit attempting to void millions of votes in Georgia, Michigan, Pennsylvania and Wisconsin, a lawsuit that was joined by Trump, 126 members of Congress and a dozen Republican state attorneys general.

The Supreme Court on Friday night rejected the lawsuit, saying that states do not have the right to sue other states over their election rules and laws.

While there is nothing in the Constitution or federal law that requires electors to support the candidate who won their state, many states have laws that allow them to impose fines or other penalties on what are termed “faithless electors.”

In total, 32 states and Washington, D.C., have laws that allow rogue electors to be punished, although no state had ever pursued the matter until 2016, when nationwide 10 of the 538 electors attempted to vote for someone other than who won his or her state. These laws were upheld as constitutional by the Supreme Court over the summer in a unanimous vote.

After electors cast their ballots, they sign six copies of what is called a Certificate of the Vote. Final tallies are sent to the president of the U.S. Senate, in this case Vice President Mike Pence, who will count them in the Capitol on Jan. 6.

Two copies of the certificate are sent to the state’s secretary of state, two more to the National Archives and one copy to a judge in the district where the electors met to be held as a backup.

When the votes are counted before Congress next month, House and Senate members can raise objections, which each body would consider separately in their respective chambers if the objection is sustained. With the House under Democratic control, it is unlikely any objections brought by Republicans would be sustained. (The Center Square).